The third edition of the FIA IDC marks the first venue change in history of the event. After two years at a non-permanent venue in the Odaiba district of Tokyo, the first FIA-sanctioned drifting event moves to a purpose-built circuit located roughly an hour drive north from the capital city of Japan.

“I’ve driven at Odaiba [last year’s venue] many times and I always like new race courses. I was to Tsukuba before, four years ago, but that was a different course, so this track is new to me,” said the reigning FIA IDC champion Georgy “Gocha” Chivchyan.

“The straight line after the first corner is the most difficult part because you don’t carry enough speed. The more we practice, the cleaner driving we will see. The practice was a little bit short, so it’s going to be in qualifying when everyone is going to show their skills.” 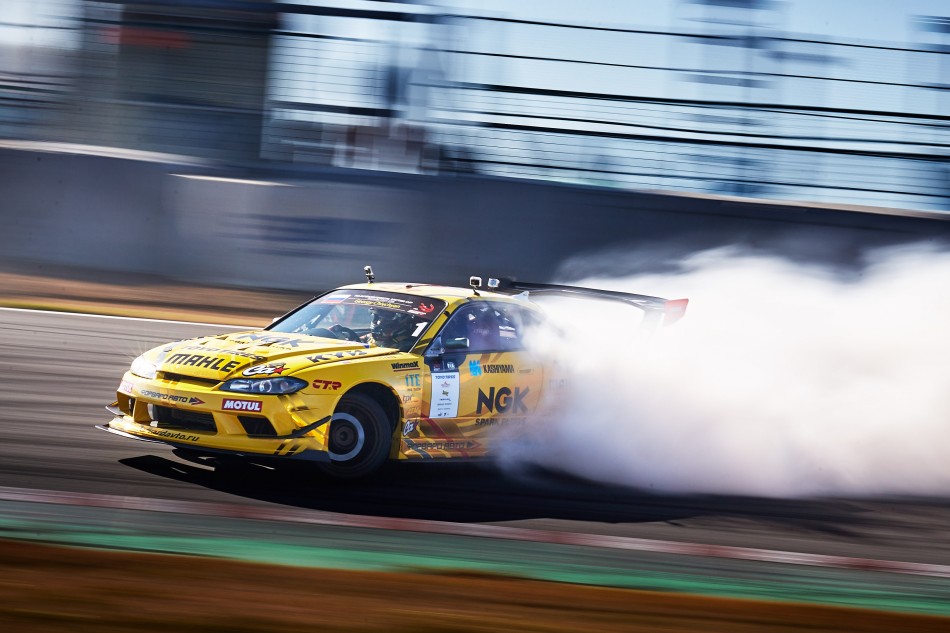 The winner of the initial edition of the event, local ace, Masato Kawabata, also praised the venue. “The track is very long, very technical and very hard – as a competitor, it’s higher level track, where it’s hard to do well,” admitted the Toyota Supra driver.

Four-time winner of the ultra-competitive Formula Drift Japan series, Andrew Gray, agrees that the course represents a great challenge for the drifters.

“The track is very challenging – I’m up to speed on fourth gear, as fast as the car would go, down to third and back up to fourth again and then down to third again. It’s very narrow and if you go off track, you’re going to hit something really solid.”

“The S section is the most difficult – to link the clipping zones. It’s very technical, both the start and the finish are hairpins. It’s very fast and very challenging, you feel alive when you’re driving it,” concluded the Scotsman, driving his world-famous 1000bhp Toyota Mark II.

“It’s my first time in Tsukuba and it’s a very meaningful event for me. The track is fast – the judges have set up a really exciting line, so it’s going to be exciting and explosive for the fans – but that should be.”

“Japan is a big inspiration for me, it’s the motherland of drifting and we’ve got an amazing team so I’m representing two countries this weekend – my homeland New Zealand and Japan. We’ve got two flags on the car,” admitted the Red Bull-backed driver of the rotary engine Mazada RX-7.

With the world class entry featuring some of the best drifting specialist out there, the 2019 edition of the FIA IDC should be anybody’s game.

Surely Kawabata, Chivchyan, Gray and Whiddett will be amongst the contenders.

“I want to win again,” Chivchyan admitted. “There’s many good drivers here and getting a good result will require taking some risk.”

“I’d like to bring the trophy back to Japan,” said Kawabata. “The whole team has been working really hard to achieve that. I think my toughest rival here will be “Gotcha”

The local ace hopes that track knowledge will play into his hands. “I’ve driven here numerous times. All the Japanese drivers will probably have a slight advantage.”

“The FIA captured drifting giving it the credibility it deserves – I’m really excited and I want to win and put on the show for the fans,” concluded Whiddett.